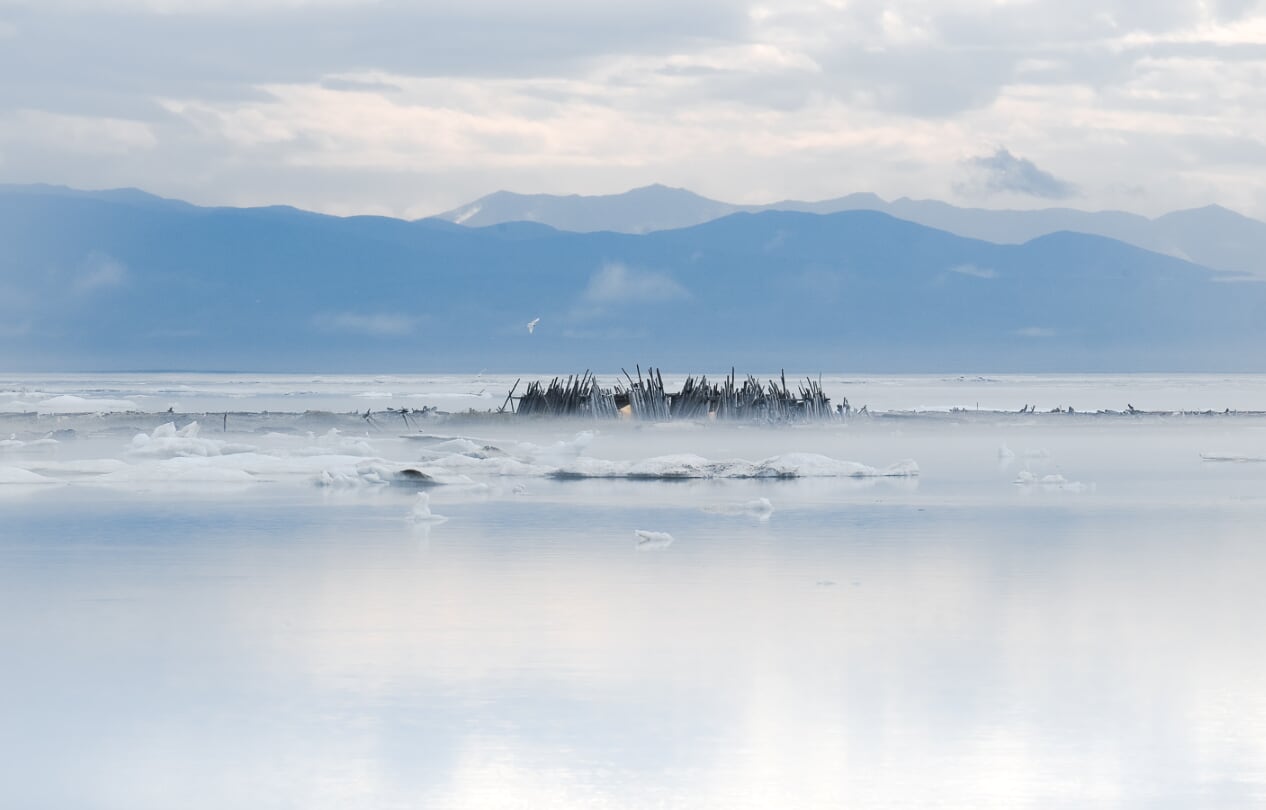 Qikiqtaruk - climate change under our feet

July 2015, Qikiqtaruk – Herschel Island, Canadian Arctic: I am dressed in full waterproofs yet somehow still sopping wet, sampling vegetation on a coastal floodplain, shivering and wondering whether my friends were luckier with the weather back in Edinburgh (probably not). What wouldn’t you do to get some data for your PhD!

July 2018, Qikiqtaruk – Herschel Island, Canadian Arctic: I am standing on a crumbling bit of ground, on the edge of the same floodplain, looking down at the waves. What a difference three years make. I have just finished my PhD, and a good thing too: the GPS in my hand is telling me that my field site now lies 30 meters out at sea.

I am an ecologist studying the responses of tundra ecosystems to climate change. Qikiqtaruk, an island off the north coast of the Yukon Territory in the Canadian Arctic, is a place where these effects are especially tangible. I was lucky enough to conduct two field campaigns there during my PhD with Team Shrub, and to return last summer to shoot a photographic series on environmental change. Like most of the Arctic, the region has experienced rapid warming in the last century, and I will give a brief account of the changes occurring on the island as a result. 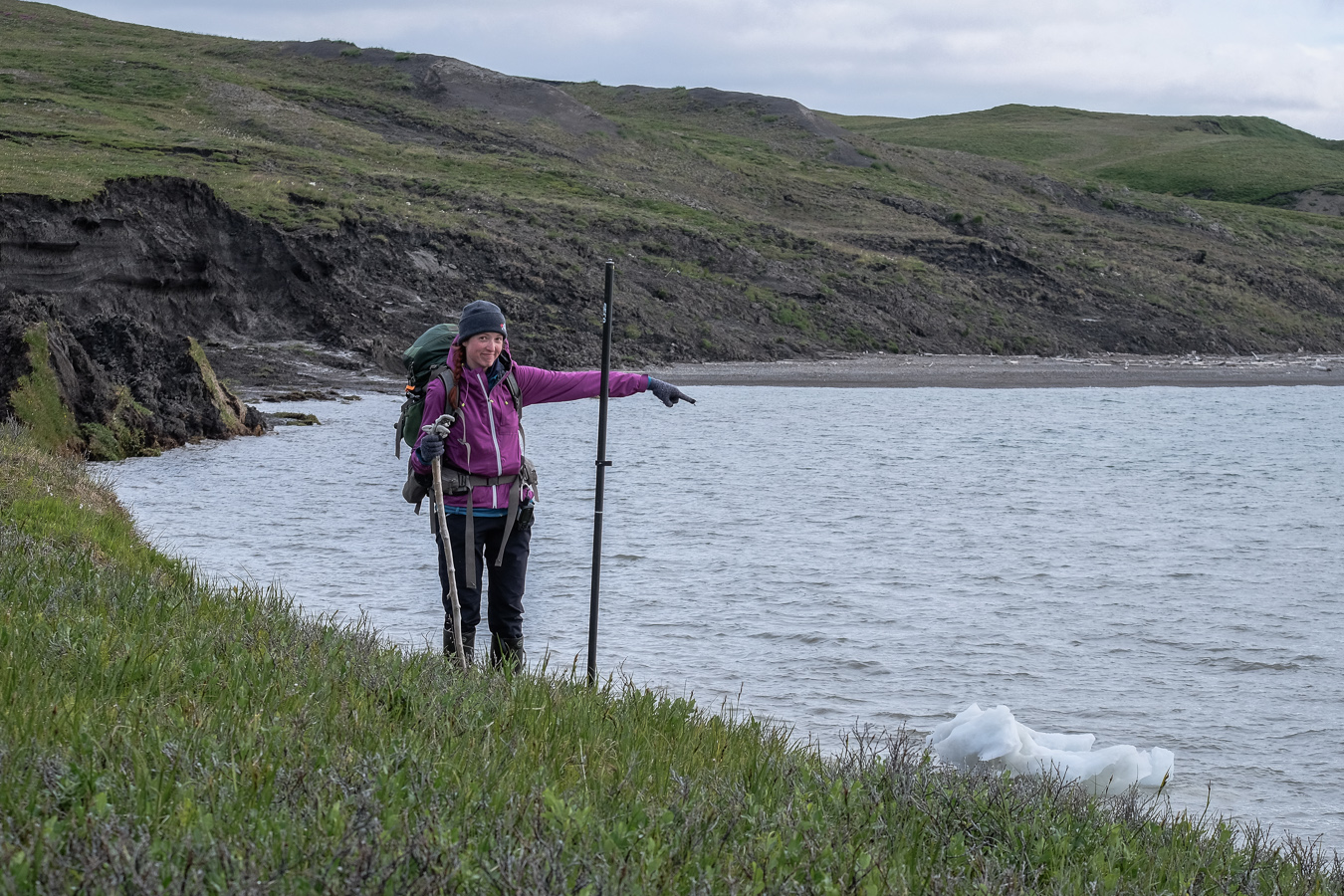 The lost plot: ground that was there three years ago is now lost far at sea. In the background, chunks of the island are facing the same fate.

Qikiqtaruk was formed tens of thousands of years ago when glaciers pushed up a pile of frozen sediments from the Beaufort Sea floor. After the ice retreated, the sea level rose and isolated the island from mainland Yukon. It is home to a diverse Arctic flora and fauna and has a rich cultural heritage. Parts of the island are now rapidly returning to the sea – by natural coastline erosion, certainly, but there is little doubt that indirect effects of global warming are accelerating the process.

Apart from a thin layer of topsoil where tundra plants thrive, the ground of Qikiqtaruk is completely frozen (permafrost) and contains large amounts of ice. It is this particular feature that makes the island degrade under our very feet. When a massive volume of ice melts and runs off, the ground above collapses, exposing more soil to thaw and forming impressive pockmarks in the landscapes called thaw slumps. The thawed sediments are then carried across a vast muddy plain (more than one unsuspecting scientist has lost a wellie walking across!) before being washed out in the Beaufort Sea.

Left: A muskox, survivor of the Pleistocene era, stands on the beach close to camp. In the background, a large permafrost thaw slump bears testimony to the changing conditions on the island. // Right: Up close, the thaw slump landscape looks like something from another planet. The headwall, around 30 meters tall, is retreating inland as fast as 14 meters a year.

The loss of permafrost on the island is not only exposing old carbon and altering the sediment balance of the Beaufort Sea: it is also threatening sites of cultural significance. Burial sites and archaeological traces of Inuvialuit people and their ancestors are scattered around the same floodplain that hosted my lamented study plot, and many will follow the same fate within the next century. The hobbit-hole ice houses, blasted in the permafrost by late-19th-century whalers to store food, have all crumbled, except one. The valiant crew of Heritage Yukon comes every summer to carry out essential maintenance on heritage buildings, but there is only so much you can do when time and tide are working against you. 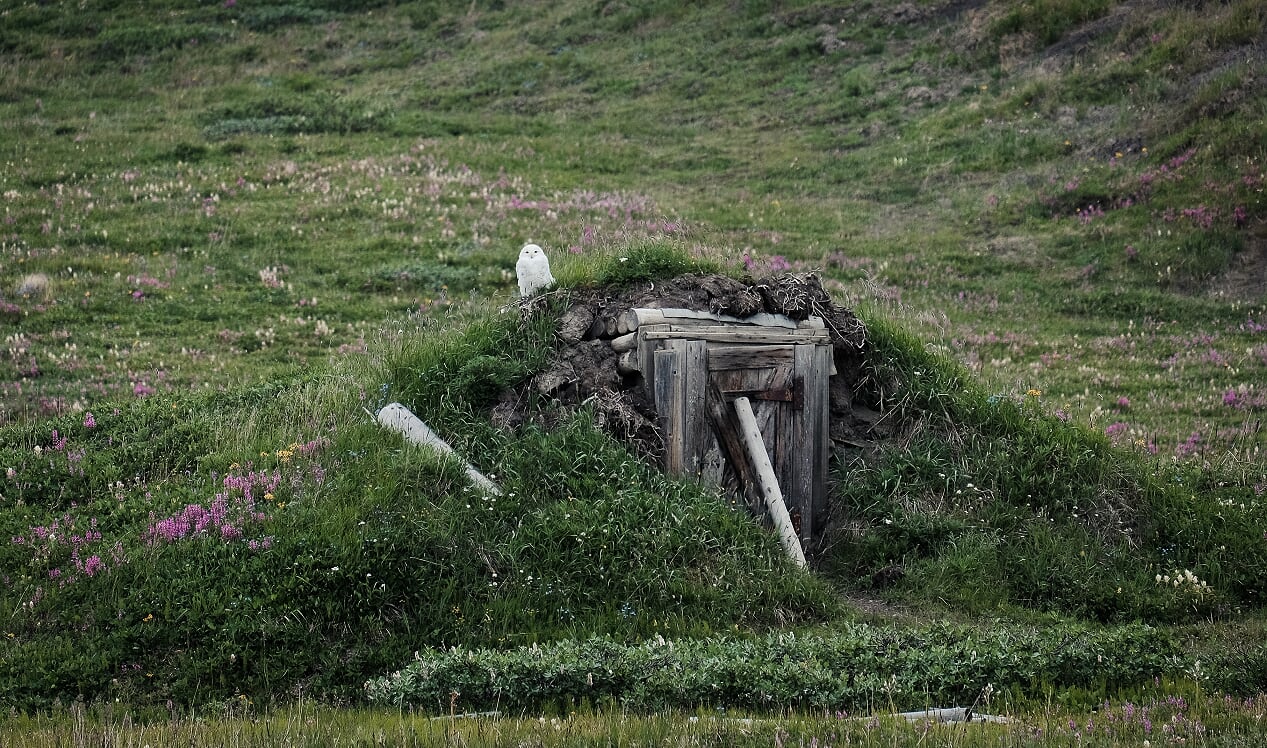 A snowy owl perches on top of the last standing historic ice house on Qikiqtaruk. It has become unstable in recent years and may soon collapse due to the thawing of the permafrost.

Qikiqtaruk is a unique place for ecological research in the Arctic, as it is one of very few places where environmental parameters such as permafrost depth, vegetation structure and composition, and wildlife population abundance have all been monitored in one location since 1999 thanks to the efforts of local park rangers, the Yukon government, and scientists from around the globe.

A striking conclusion emerging from this long-term monitoring is that the vegetation is shifting towards a greater abundance of shrub species: a greener, taller tundra in the making. On the surface, this seems like good news (who doesn’t love plants?!), but the consequences of this vegetation change – which is mirrored across most of the Arctic – on carbon balance, wildlife behaviour and other aspects of tundra ecosystems are far-reaching and still not completely understood. 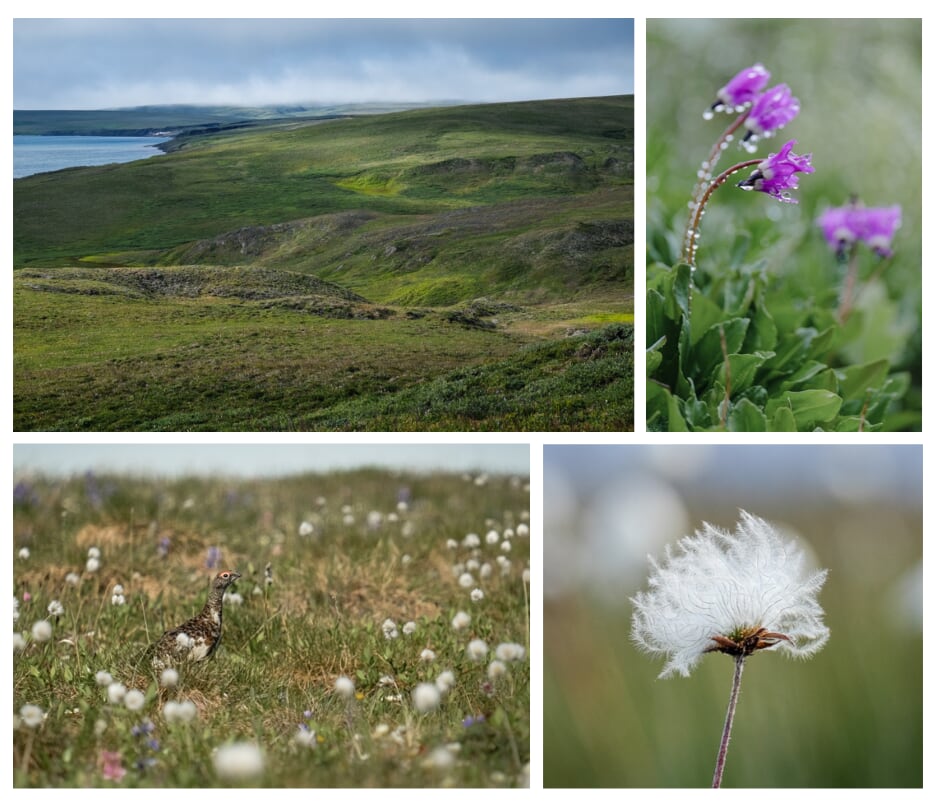 People tend to think of the Arctic as completely white, but even at 69° north, the short summer sees a wealth of plant species leafing out and blooming.
Top left: the green and gently rolling hills of the island / Top right: the delicate Western Arctic Shooting Star (Dodecatheon frigidum) / Bottom left: A sea of cottongrass (Eriophorum vaginatum) does make parts of the island look white (can you spot the ptarmigan?) / Bottom right: the feathery filaments of the mountain avens (Dryas integrifolia) have unfurled and are ready to be dispersed by the wind.

A storm is brooding

Extreme weather events have also become more common. Thunderstorms, for instance, are rare in the region  but seem to occur more frequently in recent decades. The camp is also periodically under threat of being flooded. Some of the historical buildings were already moved to safer locations in the past, but an extreme storm surge in 2016 saw water levels rise right to the threshold of our cabins! 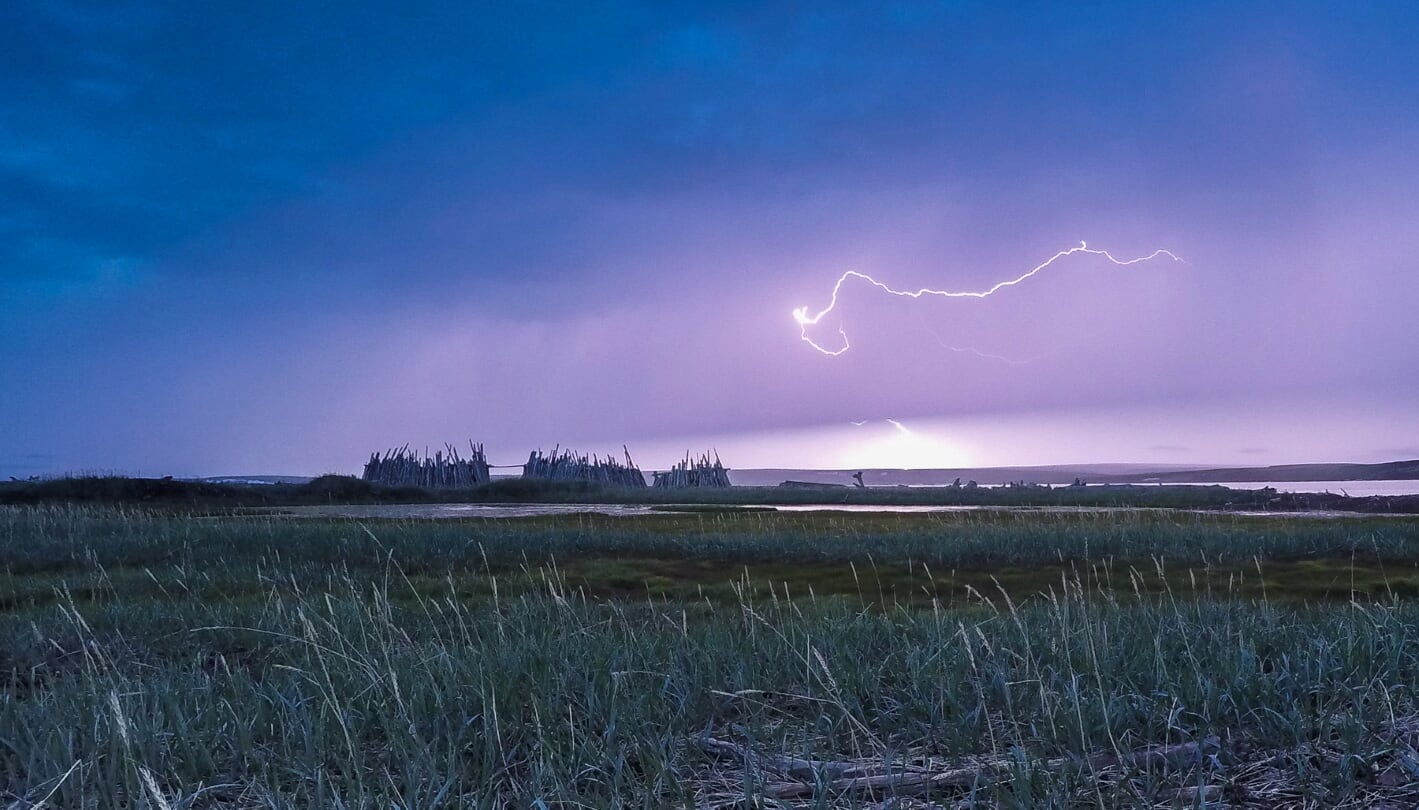 A rare thunderstorm rages over camp. The driftwood structures are tent shelters, protecting sleepers against the worst of the wind and rain.

These stories may seem anecdotal, and I am aware that I speak with less than a decade of experience working in the Arctic. But others, who have a lifetime’s worth of intimate knowledge about the land, tell similar stories. And I’m of the opinion that if we can see the landscape changing, with our naked eyes and over such a short period, it is way past the time for debating the if’s and why’s, and time to unpick the how’s and predict the when’s. Meanwhile, Qikiqtaruk will continue its slow return to the sea, but lessons learned from this living Arctic laboratory in a bubbling sea might yet give us clues to understanding and mitigating the consequences of global change in the wider Arctic. 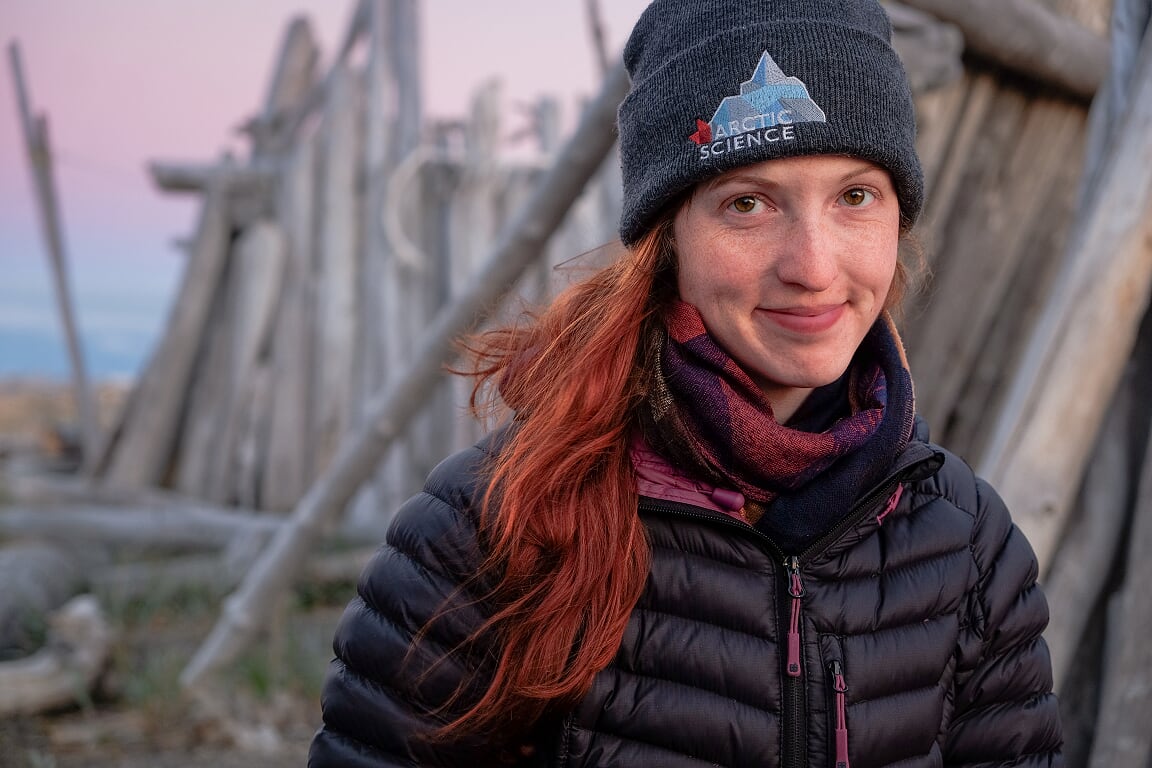 Sandra Angers-Blondin has recently completed her PhD at the University of Edinburgh, measuring the climate responses of tundra plants to climate change. She is also a photographer with a passion for the natural world, and is currently working on an environmental awareness project about Qikiqtaruk funded by the Royal Photographic Society: www.vanishingislandphoto.com