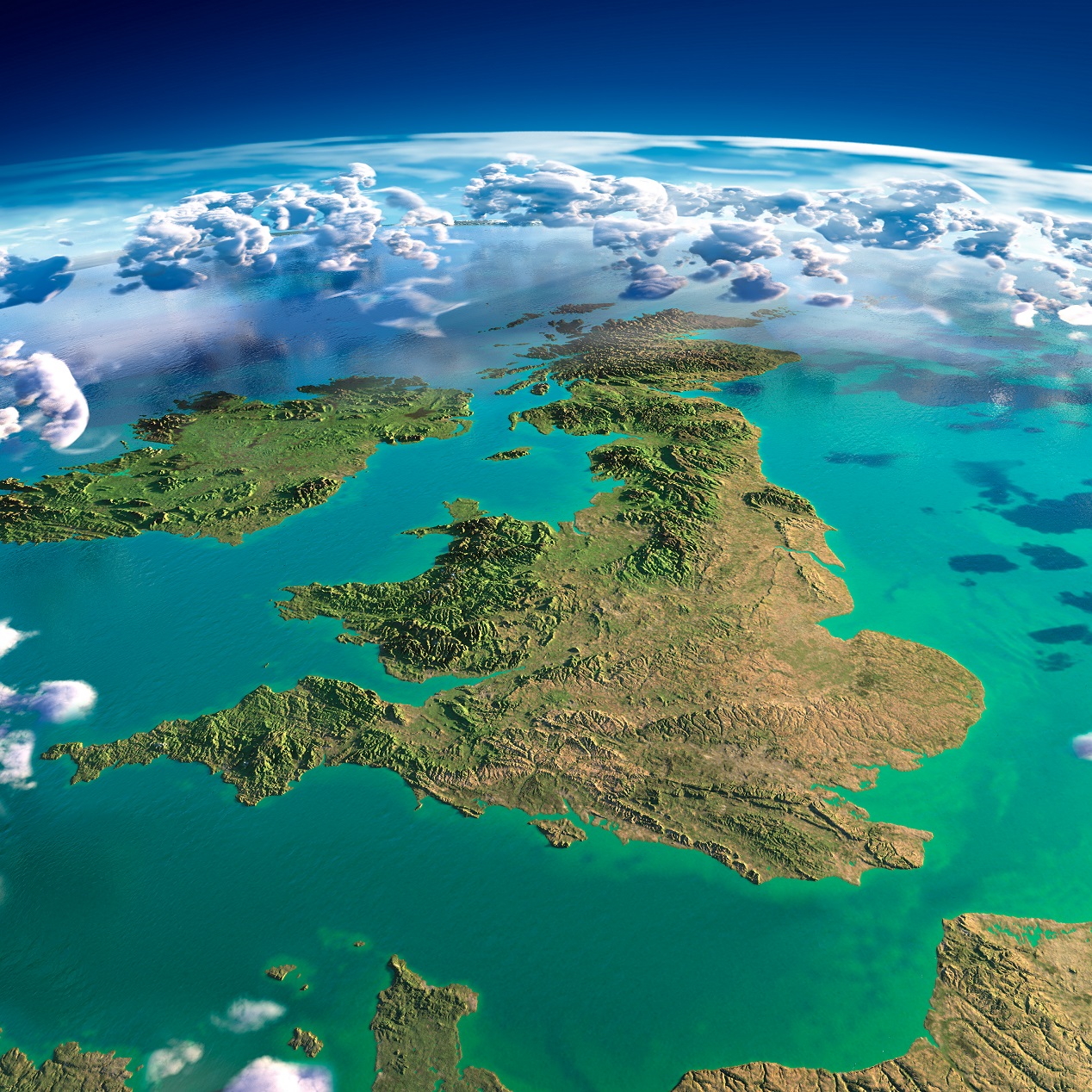 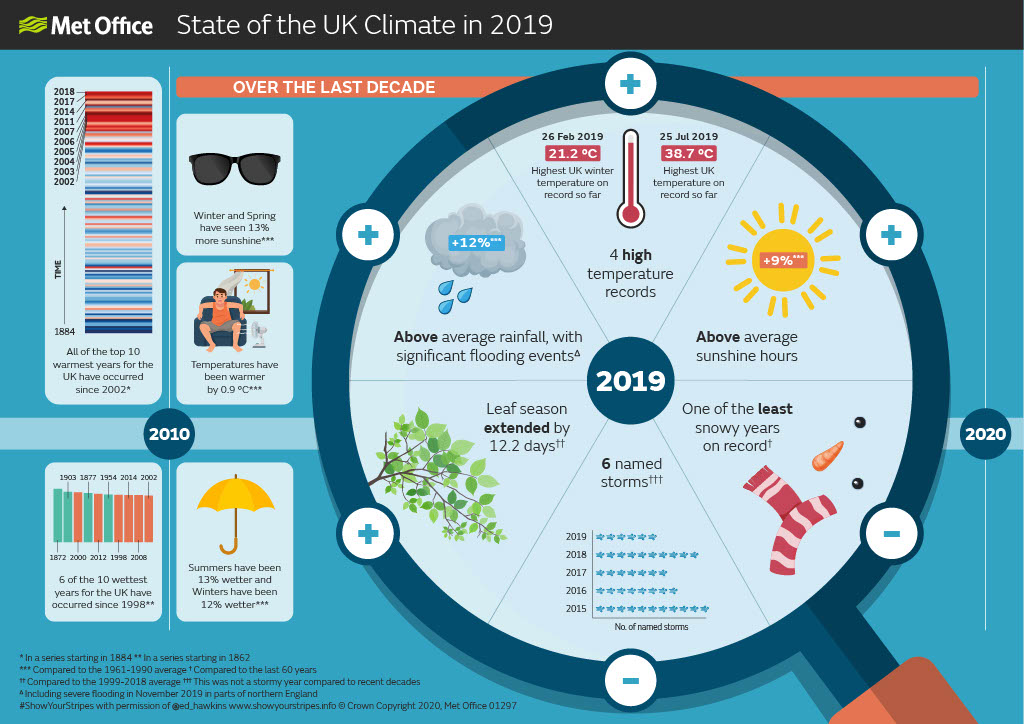 The sixth report in the State of the UK Climate series confirms that 2019 was the 12th warmest year in a series from 1884. Although sitting outside the top ten warmest years in the series (all since 2002), the year was most remarkable for setting four UK high temperature records, including:

No national low-temperature records were set during the year.

The State of the UK Climate report is compiled by the Met Office and published in the Royal Meteorological Society’s International Journal of Climatology.

Mike Kendon is the lead author of the report for the Met Office. He said: “Our report shows climate change is exerting an increasing impact on the UK’s climate. This year was warmer than any other year in the UK between 1884 and 1990, and since 2002 we have seen the warmest ten years in the series. By contrast, to find a year in the coldest ten we have to go back to 1963; over 50 years ago.”

The Central England Temperature series is the longest instrumental record of temperature in the world, with annual, seasonal and average monthly temperature information stretching back to 1659.

Mike Kendon added: “The Central England Temperature series shows us that the 21st Century so far has been warmer than the previous three centuries.”

2019 was the sixth consecutive year with fewer frosts than average and it was one of the least snowy years on record.

Dr Mark McCarthy, head of the Met Office’s National Climate Information Centre, added: “The climate statistics over time reveal an undeniable warming trend for the UK. We are also reporting on changes in other aspects of our weather and environment such as rainfall, snow, sunshine, sea level and even tree leafing dates. The observed changes are to varying degrees a consequence of both global climate change and natural variability in our climate. A comprehensive report such as the State of Climate provides the basis for ongoing research to better document and understand the climatic changes that we can expect in future.”

Dr Mark McCarthy added: “It was a particularly wet year across parts of central and northern England—notably Lincolnshire, Nottinghamshire, Derbyshire, Leicestershire and Cheshire received between a quarter to one third more rainfall than normal. For northern England (north of a line from the Wash to North Wales) this was the ninth wettest year in a series from 1862.

“Parts of northern England, particularly South Yorkshire and Derbyshire, experienced some very severe flooding in early November. It’s worth noting that since 2009 the UK has now had its wettest February, April, June, November and December on record – five out of 12 months.”

The State of the UK Climate Reports are published annually in the Royal Meteorological Society’s International Journal of Climatology. The reports are open access, and they are freely available for anyone to read and provide an opportunity for other scientific papers to reference the report.

Professor Liz Bentley, Chief Executive of the Royal Meteorological Society, said: “The reports provide an important record of the weather and climate in the UK each year, highlighting short‐term variations as well as long‐term trends of what has actually happened and how our climate is changing. We are delighted that this year there is a section on phenology - the study of plants and animals in response to the weather and climate.”

The National Oceanography Centre (NOC) contributed to the sea-level section of this report. The NOC’s Director, Professor Edward Hill, said: “Sea-level around the UK is expected to continue to rise due to an increased rate of ice loss from the Greenland and Antarctic ice-sheets, as well as continued glacier mass loss and warming of the ocean. An immediate consequence will be higher extreme sea-levels, which cause flooding and threaten lives, property and key infrastructure.

“However, the report highlights continuing concerns around the quality of UK sea-level measurements. As the report states, we have been unable to calculate the uncertainty of the UK sea-level index for 2018 and 2019, as only one of the long-term tide gauge sites is producing data of sufficient quality.

Changes in phenology (recurring events in nature and their relationships with climate) provide a wide range of information about the health and functioning of plants and ecosystems, and their responses to climate. The Woodland Trust contributed to the State of the UK Climate report through its phenology project: Nature’s Calendar.

Darren Moorcroft, chief executive of the Woodland Trust, said: “Understanding the impacts of climate change is crucial in helping us fight it.”

“In response to the warm winter and mild spring temperatures, the first leaves appeared on trees nearly ten days earlier in 2019, compared to our baseline period. Whilst this may not sound like much, research using these citizen science records has shown this can have dire impacts further down the food chain.

“Our trees, and all the wildlife they support, are on the frontline of climate change and ultimately some species will be able to adapt better than others.

“This is a stark reminder of the need to take immediate action on climate change. Trees are not only a measure of what’s happening, they’re a vital part of the solution: As natural carbon stores they’re key agents in fighting climate change and mitigating against its impacts, for example in their role in lessening the devastating effects of flooding.”

Professional Accreditation
New guidance videos for Accreditation and CPD
Publications
Does your research span the atmosphere, climate and ecology? We want to hear from you!
Events
Video presentation now available: Air pollution in the UK during the COVID-19 lockdown
Membership
Six Month Membership Offer for New Members
Publications
A new series of Research Summaries from across the Society’s journals portfolio
Publications
Meteorological Applications Virtual Issue