The Role of Council and its Members

The Society is governed by a Council of Trustees who meet three times a year to set the strategic direction of the Society and review the delivery of its programmes of work. Council members make an important contribution to the role of the Society and each year there are a number of vacancies for Council as Members complete their term of office.

Being a Member of Council can be a very rewarding experience and provides an opportunity for individuals to be directly involved with the workings of the Society.

The business of Council is guided by the Society’s Royal Charter, By-Laws and Standing Orders (these documents can be found here).

Council, chaired by the President and supported by the executive team, sets the strategic direction of the Society and reviews the delivery of its programmes of work. All members of Council are Trustees of the Society.

Council consists of the following members:

The President of the Society is a prestigious role, acting as a figure-head in promoting and representing the interests of the Society to key stakeholders.

They preside over all of the Society’s activities and strategic developments, and chair Council Meetings, the Awards Committee, and the Annual General Meeting.

The President will deliver at least one Presidential Address during their two-year term of office. The President shall normally serve as a Vice-President the year before and the year immediately after being President.

The Vice-Presidents of the Society play an important role in helping to shape the strategic direction of the organisation.

They undertake duties requested by and agreed with the President or Council as the need arises.

Vice-Presidents shall normally take ownership of at least one of the Society’s strategic initiatives on behalf of Council. This may involve participating in a project team established to deliver this initiative.

In addition to the specific roles defined here, Vice-Presidents are entitled to take up membership of whichever of the Society’s committees they may wish to become involved with.

The Treasurer plays a key role as one of the senior Officers of the Society in helping to shape and develop the future direction of the organisation during their five-year term of office.

The main duties of the Treasurer are outlined as follows:

In addition to the specific roles defined here, the Treasurer is entitled to take up membership of whichever of the Society’s committees they may wish to become involved with.

The General Secretary plays a key role as one of the senior Officers of the Society in helping to shape and develop the future direction of the organisation during their five-year term of office.

The main duties of the General Secretary are outlined as follows:

In addition to the specific roles defined here, the Treasurer is entitled to take up membership of whichever of the Society’s committees they may wish to become involved with.

The Society has a number of main Committees overseeing the programmes of work, these include Professional Accreditation Board, Climate Science Communication Group, Education and Outreach Committee, Scientific Publishing Committee and Meetings Committee.

The role of a Committee Chair is an important one in ensuring that the programme of work of that committee is dealt with appropriately and meets with the wider strategic aims of the Society.

All Committee Chairs keep the Terms of Reference for their committees under regular review and report to Council on a regular basis. The majority of Committee Chairs will sit on Council if appropriate.

Other Members of Council actively contributes to the affairs of the Society and help shape the direction of the organisation.

A Member serves a three-year term of office and no person who has previously been a Council Member for three successive years can hold office as a Member of Council unless at least one year has elapsed since that person’s last period of office.

Nominations for Election to Council

The Nominations Committee review the vacancies that arise on Council and evaluate the balance of skills, knowledge, experience and diversity of Council. In the light of this evaluation, the Nomination Committee shall prepare a description of the role and capabilities required for each particular vacancy on Council and a list will be circulated to members in mid-September detailing the names of Members of Council due to retire on 30 September of the following year.

The current list of vacancies and relevant role descriptions are circulated to members of the Society who are invited to send nominations to the General Secretary by mid-October of suitable candidates to fill these vacancies.

The nomination should include a statement that details the nominee’s skills, experience and qualifications for the role and should be supported in writing from two members of the Society. Council will also include their own nominations to fill vacancies for Council.

The Nominations Committee shall then assess the nominations against the required skills and expertise for each role and draw up a provisional list to be approved at the February meeting of Council and this list is circulated to members by mid-March. If only one candidate has been assessed by the Nominations Committee as duly qualified for a vacancy, the person nominated shall be deemed to be duly elected and there will be no ballot for election to Council.

If more than one candidate has been assessed by the Nominations Committee as duly qualified for a vacancy then the list will be circulated to members normally four weeks prior to the Annual General Meeting so that a ballot for election to Council can take place.

The role of a Council Member

Have you ever thought about becoming a Council member? It is a very rewarding committment and Council members get a lot out of it, as well as learning about and being involved with the workings of the Society.

Below we have spotlighted two members who are either current members or have recently been on Council.

These are Ellie Highwood, Dean of Diversity and Inclusion and Professor of Climate Physics at the University of Reading, and Jenny Rourke, Deputy Chief Meteorologist at the Met Office. 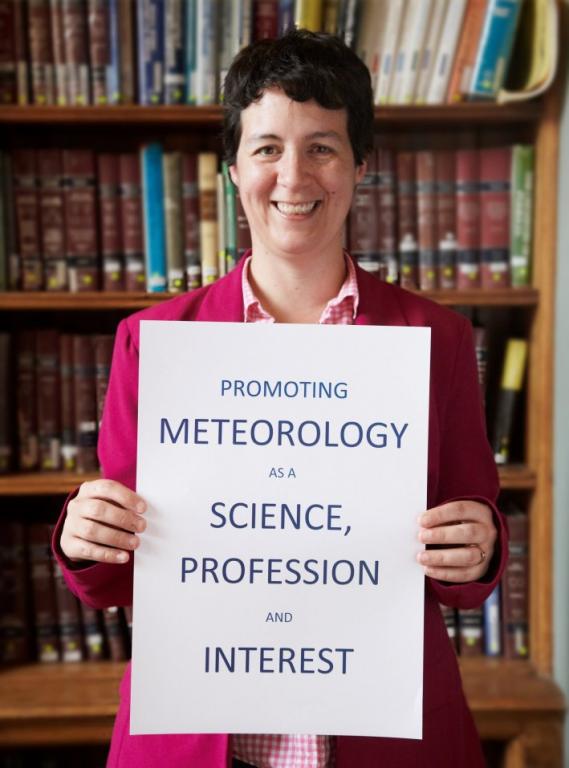 What is your job?

I did a degree in Physics at the University of Manchester and then moved to the University of Reading to complete a PhD supervised by Sir Brian Hoskins. I stayed on as a postdoctoral researcher, although changed more towards climate and climate change. In 1998 I won a NERC research fellowship to look at the role of absorbing aerosols in climate, and then went on to become a lecturer in 2001 at the University of Reading. In 2011 I became Professor of Climate Physics and, prior to becoming Dean in 2015, I served as Head of Department of Meteorology.

What made you join Council?

I've actually been on Council three times. The first time I was a postdoc, and saw it as a way to be involved in "my" learned Society and also to make contacts. I think I was asked to be on Council as I had just played a role on the organising committee of the 150th Anniversary conference. I spent 3 years on Council, and a little longer on the Education Committee. I went back on Council in October 2012 as Vice-President, and Chair of the Strategic Programme Committee. I accepted this nomination as I think it's important to give back to the community and help develop the next generation of meteorologists. I was then elected President of the Society and served 2 years in this role between 2016-2018.

What do you feel you gain from being a Council Member?

The first time around, I gained an understanding of the Society, and many contacts (particularly senior figures in the field). I have gained a lot of skills, including chairing and participation in meetings, communication skills, financial understanding etc.

What do you think the most important functions of Council are?

I think Council has an important function in linking the community to the work of the Society. This is why it is important for the Council to be drawn from across the membership, so that each group has a spokesperson. Additionally, members of Council often have expertise and experience in diverse organisations, and therefore can use these in helping the Society to deliver their aims. There are many things that the Society could be doing - Council, and its committees, can help prioritise these.

What is your job?

I am Deputy Chief Meteorologist at the UK Met Office.

What made you join Council?

I was invited to join Council due to my experience organising two of the RMetS Student Conferences. Having attended and thoroughly enjoyed the conference in 2007 I volunteered to help the Organising Committee for the conference in 2008 and was elected Chair of the Committee for the 2009 conference. I was therefore asked to represent the student community on Council from 2010 to 2013. As an Operational Meteorologist I also represented the Operational Forecaster community on Council and acted to ensure that the views of shift workers were represented. I am now co-Chair of the Education and Outreach Committee and sit on Council as part of this role.

What do you feel you gain from being a Council Member?

Being a Council member has given me an excellent overview of the workings of the Society: from the activities of the Special Interest Groups to the hard work that goes on by the dedicated Headquarters staff to arrange the conferences, meetings, education outreach and keeping the paperwork and finances in order. The Council meetings gave me an opportunity to meet a great variety of interesting people from across the meteorological community and opened my eyes to the wide range of people that the Society serves. My time on Council made me appreciate all the hard work that goes on ‘behind the scenes’ and gave me a new appreciation for the Society and its aims.

What do you think the most important functions of Council are?

The Council are a group of volunteers who provide a broad cross-section of perspectives from across the RMetS membership group. Their most important function is to ensure that the Society is working hard to achieve its main aims and making sure that everything is being done properly, from scrutinising the accounts to maintaining an overview of all of the activities that go on throughout the year. This ensures that the Society runs smoothly in its mission to “to promote the understanding and application of meteorology for the benefit of all”.

Election to Council in 2019

Nominations for Election to Council in 2020 are now open. The closing date is 25th October 2019.

Any member of the Society who is over the age of 18 years may be nominated for election to Council and self-nominations are encouraged. Two members of the Society must support each nomination together with consent of the nominee to accept office if elected.

Nominations for Members of Council retiring on 30th September 2020 are required for the following positions:

The role description for this vacancy can be found in the resources list below.