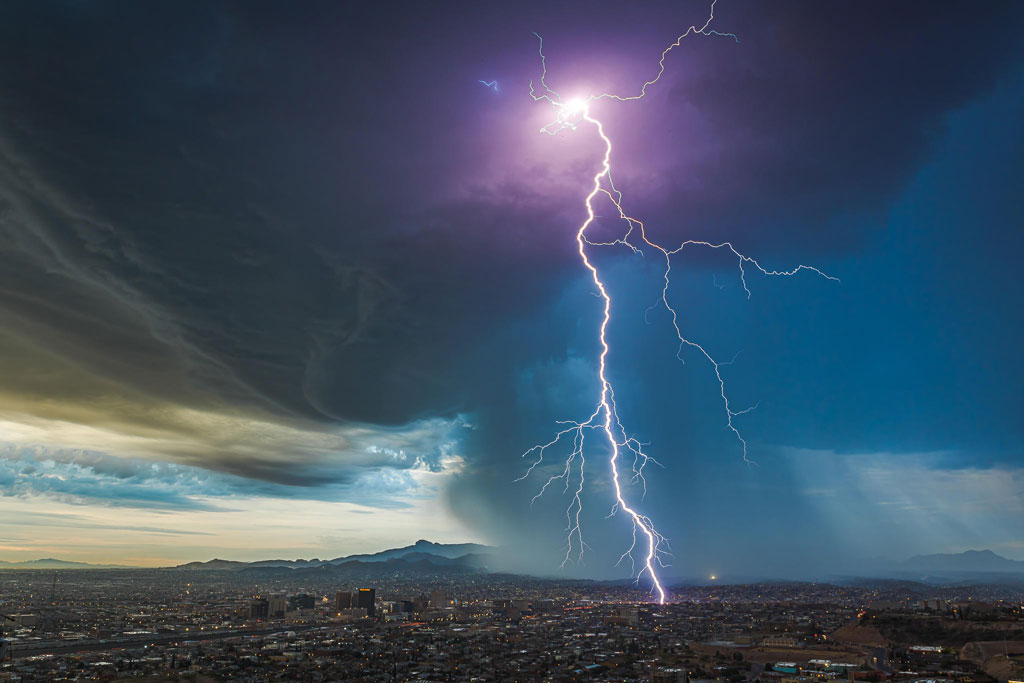 Story behind the photo:  I live in Arizona but was visiting family members in El Paso, Texas that week. Very early on the morning of November 6th I woke up and felt an urge to check my radar app on my phone.  I discovered a discrete thunderstorm cell was moving north from Mexico towards the U.S. border near downtown El Paso.  I hurriedly gathered my camera gear and drove to an overlook that gave me a perfect vista of the storm and of the downtown El Paso skyline.  It's always been a "dream shot" of mine to capture lightning over this desert city landscape. Thankfully the storm held together as it made its trek north across the border between Ciudad Juarez, Mexico and El Paso, Texas.  My dream shot came true as I captured this and several bolts before leaving shortly after this image was taken due to the lightning getting too close for comfort!

Weather caption: Thunderstorms are associated with towering clouds known as cumulonimbus. These are formed through the process of convection, whereby heat and moisture are transported vertically in the atmosphere. Three key ingredients are required to initiate convection: instability, moisture, and lift. The lifting mechanism can be from the sun heating the earth’s surface; the air near the surface being forced to rise over higher ground; or instability within a weather front. Worldwide, 16 million thunderstorms are estimated to occur each year, all of which can be accompanied by lightning, heavy rain, hail, strong winds and sudden changes in temperature.

As a storm photographer, I knew that I would be racing against daylight to capture bolts on the skyline. I had my 3 stop neutral density filter ready to use in case the sun poked through from the left side of the image. Thankfully the storm raced over the valley without having to use that. However, being in the path of a highly charged electrical storm also has its own risks, so I made sure I left the area to avoid being struck by lightning.